Sweden hosted the first meeting of the Russian-Swedish Trade and Economic Cooperation Steering Committee in eight years. The committee is co-chaired by Denis Manturov, Minister of Industry and Trade of the Russian Federation, and Anna Hallberg, Swedish Minister of Foreign Trade, with responsibility for Nordic affairs.

During the Committee meeting, the parties discussed the issues of resource saving, the greening of industry and possible areas of technology transfer.

"The work of the Steering Committee should also play a significant role in the development of these areas. We support the creation of new working groups - on sustainable development and climate, and on education and science," Denis Manturov summed up.

Anna Hallberg, Minister for Foreign Trade of the Kingdom of Sweden, spoke about the future of Russian-Swedish trade and economic relations. "The green transition means a great opportunity to modernize the economies of both Russia and Sweden," she stated.

ТIn addition, Swedish Minister Anna Hallberg and Russian Minister Denis Manturov met at the Stockholm School of Economics to discuss Circular Economy and Innovation. The event was cohosted by the SSE, the Russian Trade Representation in Sweden and Östkontoret.

Anders Paalzow, the President of SSE Russia, welcomed event guests: "2021 is a notable year in Russian-Swedish relations. 300 years ago, the Great Nordic War came to an end with the signing of the Nystad peace treaty. The Nystad Peace memorial medal shows the shapes of St Petersburg and Stockholm connected by a rainbow and the inscription "Bound by harmonious peace" as a sign of peace. I think this medal well illustrates both Russian-Swedish Trade and Economic Cooperation Steering Committee work as well as the Stockholm School of Economics efforts to connect our two countries, including through its joint activities with leading academic institutions in Russia and providing the Executive MBA education for both public and private sector leaders and other SSE educational programs in Russia for 25 years now". 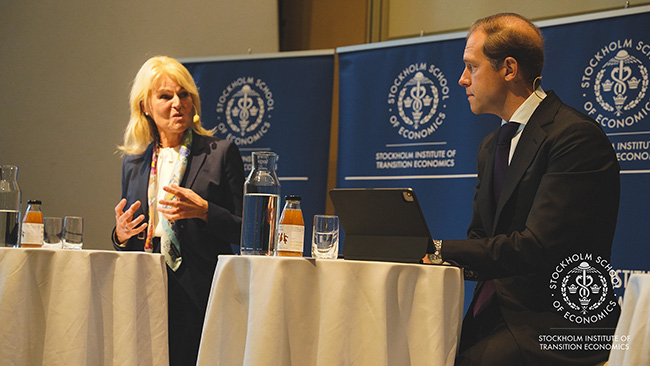