On June 8, Stockholm School of Economics, the only foreign educational institution in the country issuing European EMBA certificates, celebrated the 20th jubilee in Russia. Founder and General Director of Splat Yevgeny Demin, acting Governor of Novgorod Region of Novgorod Region Andrei Nikitin, Vice President for HR and educational projects of Mail.ru Olga Filatova and many other Russian entrepreneurs and top managers graduated from the school in the past. The event dedicated to celebration of the jubilee gathered alumni, lecturers of various years, management and partners of the school in St. Petersburg.

The official part of the party in K-2 residence on the Kamenny Island was opened by Dean of Stockholm School of Economics Anders Liljenberg. First of all, he expressed gratitude to the alumni for choice of the Swedish approach and global outlook on their educational path.

In his speech Anders Liljenberg emphasized, “Since 1997, then the school opened its doors in Russia for the first time, we became witnesses of different times and encountered economic turbulence many times. Nonetheless, we always had something to offer to managers and to entrepreneurs on the path to achievement of their goals. Students and requirements to business education change but throughout the 20 years of our work people have remained the most valuable resource of the school.”

Deputy Governor of St. Petersburg Sergei Nikolaevich Movchan joined the congratulations after management of the school. He thanked the school for participation in bringing up of the business elite of Russia. The words of gratitude and support were also pronounced by General Consult of Sweden in St. Petersburg Erik Hammarskjöld. Lars Strannegård, President of Stockholm School of Economics who arrived from Sweden to the event, stressed the merits of the school in Russia and expressed a hope for further strengthening of relations between Russia and Sweden including such strengthening due to joint educational projects.

Alumni of Stockholm School of Economics of the last five, ten and 15 years also read congratulations from the stage. Among them were representatives of Gerofarm, Nordea Bank, Rusnano, VTB 24, RZD. Zarubezhneft and other biggest Russian and foreign corporations.

The lecture and the follow-up series of questions and answers with Tatiana Nikitichna Tolstaya attracted significant interest of the audience. One of the brightest contemporary writers and outrageous blogger spoke to the alumni about her own educational way that led her to career of a writer, as well as about searches of her equally talented relatives for themselves. In her speech Tatiana Nikitichna emphasized many time how important was self-realization in any field and wished the alumni not to be afraid to ask themselves questions to doubt and to trust their own intuition. 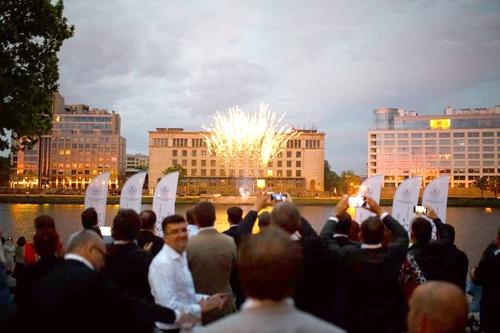