On October 22, more than 40 employees of Russian Railways received certificates of Stockholm School of Economics that confirmed their successful studying between 2014 and 2015 in St. Petersburg. This is the seventh group of graduates of the corporate educational program of RZD holding and Stockholm School of Economics in modular format Executive MBA.

Vice President of RZD Dmitry Shakhanov and member of the Board of Directors of Stockholm School of Economics Rolf Eidem participated in the solemn ceremony of handing out of educational documents.

Greeting the graduates, the vice president recalled that in 2008 this format of education was offered for the Oktyabrskaya Railway and now this program already had 272 graduates from the entire network of Russian Railways.

- We work in a difficult but interesting time. The company is completing the path of reforming and now we transit to new methods of management. Administrative governance is being increased with corporate governance more and more. I wish you to use the knowledge that you have received successfully and to prepare yourself for big and long work.

Corporate educational program of RZD in modular format Executive MBA corresponds to the first year of studying in Stockholm School of Economics and is the most prestigious program in the corporate system of training of employees of RZD. The program is implemented in the framework of the strategy for development of human potential of the company. This is an important step in getting of business education recognized all over the world. The program is aimed at improvement of competences of employees of the company who strive for acquisition of new knowledge, improvement of qualification and level of professional training, improvement of competences and broadening of horizons of thinking. Every year the quantity of people who wish to study under this program grows. 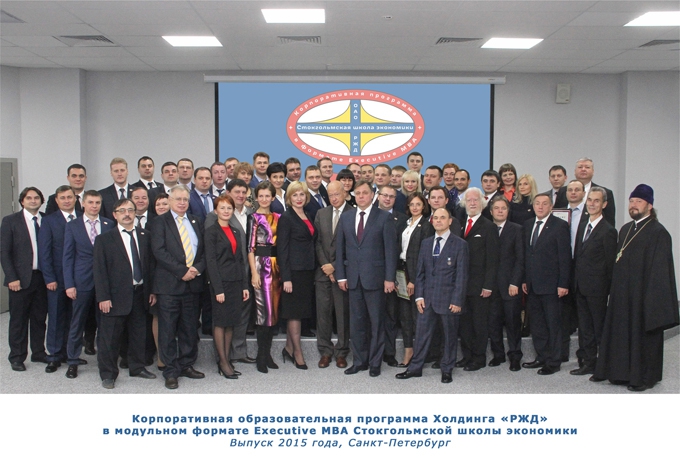