Kjell Nordström conducted the presentations for SSE Russia Alumni and Participants in Moscow and St. Petersburg

Kjell Nordström, one of the authors of the world bestseller Funky Business, gave a talk at the Stockholm School of Economics in Moscow and St. Petersburg, where the book was published for the first time in Russia. During a two-hour lecture this visionary and consultant on strategic management discussed with the Stockholm School of Economics Alumni modern trends of corporations’ development and explained what employees will be sought-after in the labor market of the future.

Nordström stressed that the growth of amount and significance of knowledge has become so enormous that the brain of a modern human feels three thousand times greater pressure of information than 30 years ago. And since information is now produced by machines, its volume doubles every two years. “Every morning we wake up more stupid than when we went to bed,” Kjell Nordström remarked about the scale of the sweeping changes. This is the reason why it is impossible to remain an expert in everything or even in one thing. In the economist’s opinion, there are no experts any longer; they are changed with amateurs who master something new on a daily basis. That is why in order to achieve results, it is necessary to learn how to cooperate. If in the past musicians were composing their music in seclusion, now it is more like playing with Lego: for one song recording it is necessary to involve 12-20 people, professionals in their areas.

Nordström divided knowledge in two categories. The first one is verbal knowledge, it is gained by university education, it forms the foundation and it can be expressed in words. And although the economist qualifies it as absolutely necessary, but employees’ competitive advantages are based on the second type of knowledge – implicit of tacit knowledge. This knowledge enables a person to analyze and find solutions; and groups of workers can share this knowledge nonverbally, thus developing a special creative atmosphere. This encourages appearance of such conglomerates as Silicon Valley and companies that previously promoted remote working now return employees into their offices where it is possible to exchange tacit knowledge.
According to Nordström, the speed of today’s business processes requires immediate solutions and actions from companies. “Companies should abandon planning, instead of it they should go forward by trial and error without wasting time on developing long-term strategies. The exchange rate and stock value are “chaotic systems of the second order”, their behavior is impossible to predict, which makes planning useless. It is like a tribal rain dance – definitely useful for physical fitness, but it will bring no results,” stresses Nordström.
The lecture given by Kjell Nordström is one of the events on the threshold of the twenty-fifth anniversary of the Stockholm School of Economics in Russia that will be celebrated in 2017. During its existence in the Russian education market the school issued EMBA diplomas to a thousand of students and gave certificates to over a thousand of graduates of open and corporate programs. The book Funky Business, co-authored by Kjell Nordström was first published in Russia by the Stockholm School of Economics’ publishing division, and during the lecture the speaker revealed the title of the next book – Fuck Technology – that will come out in 2018 году. 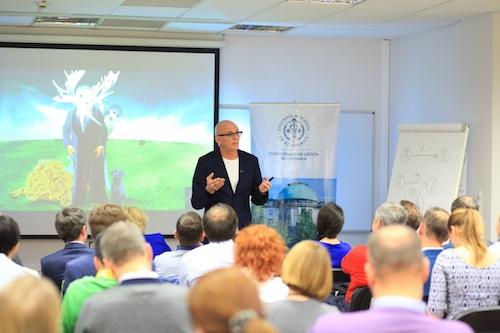