M. Video and Stockholm School of Economics in Russia: A joint path to digitalization

Modern retail business operates in a highly competitive environment. New technologies are literally destroying familiar business models and business environment. ZK Research the 75% update of the S&P500 rating in the next 10 years with an average lifetime for a company of only 12 years on the list. When it used to be 50-60 years not so long ago!

A century has passed since the cars replaced horse-drawn carriages in the transportation market, but it did not change the business model itself. But in 2009, UBER came to life and completely changed the rules of the game in its sector. Retail is also changing. A more sophisticated modern customer first conducts extensive product research - about carry out a thorough primary online research before purchasing an item.

Under these conditions, the management of the M.Video – Eldorado Group decided to form a unified corporate ideology, after which a unique educational program was designed in partnership with the Stockholm School of Economics in Russia. The program is aimed both at improving management and communication skills of the company's managers and takes into account the strategic and operational goals of M.Video - Eldorado.

"The idea of the program springs out of the understanding that after the companies merger it was necessary to create a common management team and unite them under the umbrella of the unified corporate culture. The program is focused on the soft skills development as well as the development of teamwork and communication skills," - comments Dmitry Titarev, director of the corporate program.

At the opening of the program on October 24 Enrique Fernandez – the Chief Executive Officer of M.Video–Eldorado Group and the member of the Management Board of PJSC M.Video, outlined the main strategic goals of the group for the next 3 years: the ONE RETAIL concept development and digitalization (meaning both digitalization of the company's operations and the increase of its presence in the digital market). The basis for success in the future lies in the personalized interaction with each client where and when it is convenient for the client. In conclusion, Enrique urged the program participants not to be afraid to challenge themselves, to strive for continuous development and to work hard on achievement of the company's goals.

Anders Paalzow, President of the Stockholm School of Economics in Russia, noted the value of experience exchange and the synergy between Swedish education methods and the Russian market. "The educational program with a focus on the retail segment is a promising initiative for the School, and I hope it will be in demand in the future," - said Anders.

The participants of the program have six more modules ahead. During this time they will have to go through a lot of different topics, but in each block the idea of digitalization and transformation of the M.Video – Eldorado Group into the leader of retail sector will be the main one. 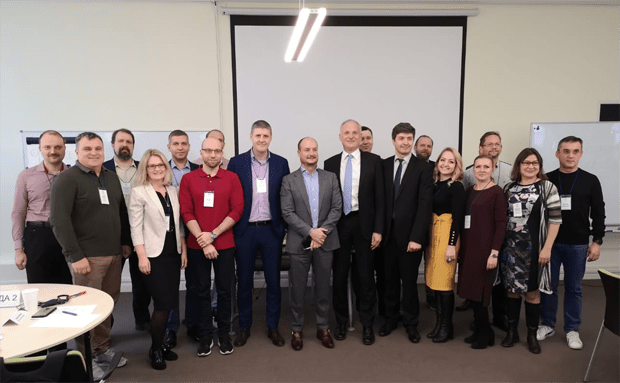